Looking to move Dropbox photos to Google Photos? Here comes a roundup of 2 ways to free transfer photos from Dropbox to Google Photos step by step. Take a further look and choose your way.

"Can I Transfer Photos from Dropbox to Google Photos?'

"A few years ago, I got an iPhone. I used Dropbox to automatically backup my personal photos in iPhone. However, I don’t want to use Dropbox anymore because of the Google Photos will help me to do this job. Now I want to migrate all my photos from Dropbox to Google Photos, but I did not find an easy way. Anyone have some suggestions? Thanks a lot."

"I have thousands of camera RAW image photos in Dropbox. My PC cannot be used to store these pictures because there is no enough space to download these files. Thus, is there any way to move Dropbox photos to Google Photos without downloading and uploading? Or any reliable and trusted third party software could help me?"

Which is Better Google Photos or Dropbox?

Compared with Dropbox, Google Photos has more advantages than Dropbox. Google Photos provides free unlimited storage space for users while Dropbox only offers 2GB free storage space, which is up to 18GB by other ways to get extra space. Besides, the photos in Google Photos will be organized and labeled automatically and allowed to search via some labels.

As the two leading photo storage services, each has its own pros and cons. Here in the following content, you will learn more about them.

Since each one has its advantages and disadvantages, it is up to you to decide which one to use. If Google Photos is your favor and you want to move Dropbox photos to Google Photos, here you will find the best free way to make it.

2 Ways: Move Photos from Dropbox to Google Photos [No Downloading/Uploading]

Method 1: Use the Official APP--Google Drive for Desktop

First of all, you can turn to the "Dropbox app" and "Google backup and sync" software, the specific steps are as follows.

Step 2. Download the "Google Drive for Desktop" app, through which you can back up photos from your computer to Google Photos.

Step 4. On the left, click "Folders from your computer". Select "Add Folder" and choose the Dropbox files or folders in the Windows File Explorer window.

This method does skip the upload and download operations, but there are still a few points to note:

Method 2: Turn to MultCloud [Most Recommended]

Is there any better reliable way to transfer photos from Dropbox to Google Photos? The best FREE multiple cloud storage manager – MultCloud will do you a favor. Better than the first method, it comes with the following advantages:

✌Do not require you have to download and install Apps in advance.

✌Transfer speed is geat since it relies on the traffic data, not the network.

✌Direct online transfer without going through your computer.

✌Run the task background smoothly even if your device is turned off.

Before you move photos from dropbox to google photos, you could create a free MultCloud account and log in. Then follow the instruction to transfer pictures from Dropbox to Google Photos easily. 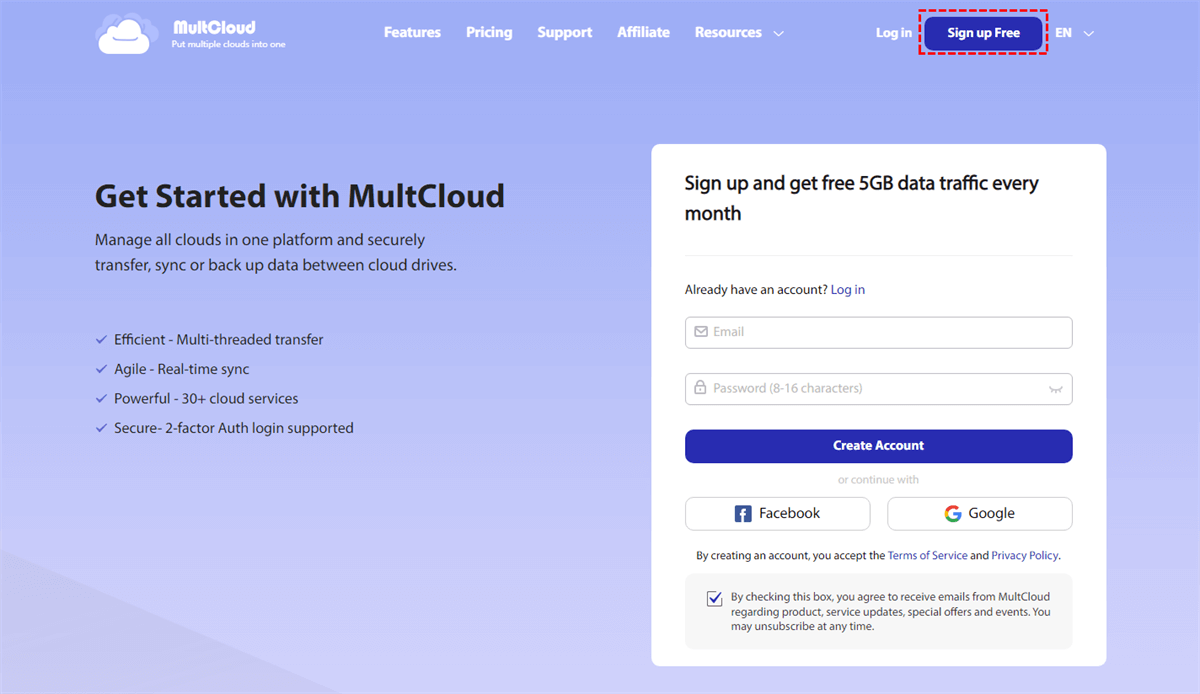 On the main window of your MultCloud account, click Add Cloud on the left side. Tick Dropbox and press Add Dropbox after inputting a Display Name. Use the same way to add Google Photos.

Compared with downloading and uploading method to move photos from dropbox to google photos, MultCloud is more powerful and flexible to use. Apart from transferring photos from Dropbox to Google Photos, you could move files from one Google Drive to another, sync files between OneDrive and Dropbox, etc., because MultCloud has the ability to transfer or sync files among more than 30 kinds of clouds like Google Drive, G Suite, Dropbox, Dropbox for Business, Flickr, Google Photos, OneDrive, Box, Amazon S3, etc.

Quickly transfer, sync or backup files from one cloud to another.